(Nazareth, Israel) This morning I woke up shaking off the failure of a filming attempt from the previous day. Pastor Hanna Eid from the Eilaboun church and I had spent two really hot hours the day before in the sun of a Sea-of-Galilean shore trying to film a devotion. Having on mind the troubles of the day before, I tried to put together more compact gear, convincing myself of the things I will and will not be needing. I walked out the door and to the bus station to catch a bus to Cana

Arriving at the church in Cana, which is below Pastor Hani Billan's house, I found he was not there; after all I did show up a little early. But, as always, there was coffee on the table outside ready to be enjoyed by anyone who’s willing to drink it. Actually, it was for the women once they were done with their prayer meeting, but I’m sure they wouldn’t mind making another pot. I drank my coffee, enjoyed the surrounding tranquility (apart from the women’s fervent prayers) and thought of how the filming will go. Little did I know that I will be spending more time with Hani than I thought. Hani arrived a few minutes later wearing his friendly smile. As any good husband would, he was running an errand for his wife, making sure the home has every need fulfilled before he could go out and fulfill needs of others. We drank more coffee–my second, third, and fourth cup already–and sat down and discussed the devotion we would be filming later. Then we packed it up and walked to the Wedding Church for a quick shoot.

Sitting in the church yard was a monk, he was reading a book when he caught a glimpse of his next two nuisances. We asked him, fingers crossed, if we could film in the church. Looking back at his book, torn between the answer he should give and the one that will get him back to his book the fastest, he said, “make it quick.” I got Hani's mic on quickly, 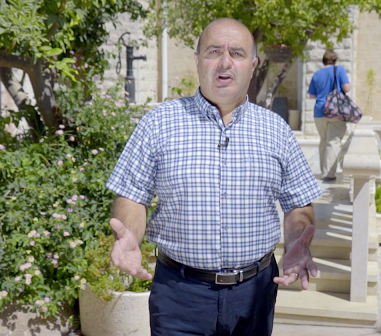 put on what I thought would be the best lens for the location and on we went.

We jumped from one corner to another trying to dodge tourists, and about an hour later “quick” was over. By this point Hani was a bit late to another appointment; he was meeting the guy who brings the food supplies for the CHLF Team's benevolence program. I’d heard of the 'warehouse' before but I’d never been to it. I asked Hani if I could tag along and he said, “let’s go.”

There it was—not what I had imagined, but not disappointed either—impressive, actually. The truck with the supplies was waiting for us outside the warehouse. The driver stepped out and gave Hani a very warm greeting which was met in-kind. Foolishly, I had forgotten to replace the battery in my camera so I missed getting that traditional Middle Eastern ‘hello’ on tape. 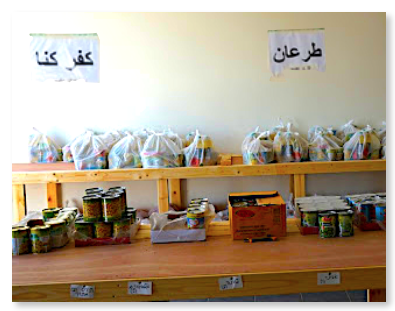 I got the camera up and running, and was introduced to this Father Christmas who works all year round. He backed up the truck and unloaded two big loads of food. Inside the warehouse are two long tables which were made by the CHLF Team members. There were names on the walls of the different villages. Under every name were the packages to be distributed in that village to families in need.

As we were getting ready to leave the warehouse, Hani’s phone rang. He answered it and I heard him quickly say, “I’ll be there in two minutes.” Then he looked to me and asked, “Do you want to come on a visit?” After a short drive we arrived at a house with a nice garden where a tall person waited to greet us. We sat in his living room as he told us about the bizarre experience he’d had. Shortly after he told us the story, Ibrahim arrived with his merry personality, and the story was told again.

For the first time I got to witness the dynamic of these interactions. I had heard about such “visits” that are an important part of the Team’s ministry, but due to cultural sensitivities and private circumstances of most visits, rarely does an outsider get to sit in on one of them. This is where my day slowed down for reflection. I was able to review the events of the day thus far in slow motion while our host talked, and he talked a lot.

I knew that there was a challenge in terms of reporting about the ministry that is being done here, because the majority of the stories cannot be hung out on a clothes line. Partly because of these restrictions, and partly because of the very scope of these ministries, I don't think I'll ever be able to communicate enough the importance of the work the Team is doing on very personal levels.

Hani’s words from the devotional video-shoot earlier that day resonated as he addressed the camera and the donor/viewers in the States: “…you are our partners in the work being done here.”

The work at hand is not such that can be done within church walls. It is done among people who may never be within those walls. But walls are there to be leapt over. I could almost physically see the string that runs from the hand of the supporter to the hand that does the actual work. It is the giving hands of those obedient to His calling that makes ministry possible through the CHLF Team members; making them partners in the work. While I might be younger and in better shape than some of the Team members, I could only hope that one day I’ll be able to leap over walls like they do!

That was some half-a-day.